After spending my first week in Ubud, I made arrangements to meet up with some Couchsurfers on Gili Air in Lombok to get our diving certification. The Gili Islands are reputable for their snorkeling, surfing, and partying (depending on which of the 3 Gili Islands you go to).

Never in a million years did I ever think I would be getting my diving certification!

I should probably explain that up until a few years ago I was… ahem… “very reluctant” to get into open natural water. I avoided it at all costs, and to be perfectly honest, it was even difficult to get me into a swimming pool (you’d have to trick me or throw me in). I’d had a number of negative experiences growing up with murky Ontario waters, that I stopped trusting water and the creatures living in it! Beaver lice larva one year, leaches, seaweed… I began to associate water with creepy crawlies, and it just generally gave me the shivers.

My fear of water was finally eased when I went to Hawaii in 2008. The water was as warm as bathwater, and it was crystal clear. I could see where I was stepping, and it wasn’t so scary after all. I rented some snorkel gear, and I think that’s when everything changed for me. I saw all of the beautiful (and hideous) creatures that live under the water, and got real close and personal with them! I saw sea turtles, eels, and fish every colour of the rainbow. I literally felt like I was in Finding Nemo – I had to remind myself to breathe, I was in such AWE! Fish have always been a little “freaky” to me, so I will admit that a few times I found my breath racing as some of the fish got very very close… and we stared at each other with equal curiosity. Sometimes they would take little harmless nips at me. It was beautiful and overwhelming at the same time. I think I went back to the beach once I realized that I was getting a bit lightheaded from my sporadic and borderline panicked breathing patterns. It was exciting! Maybe open water ain’t so bad after all?

And hey, you can’t surf in a pool, right? If I wanted to learn how to surf, I was going to have to get comfortable with being in natural water!

A lot of people here in Bali have their diving certification, and I was meeting a lot of divers. The cost was going to be much less expensive in Indonesia than it would be in Canada (not too mention much warmer!), so I decided to take the plunge and sign up for diving lessons with Michelle, a fellow designer friend I met through couchsurfing.com, and Rocio, who had already received her certification but was looking to do some more diving. 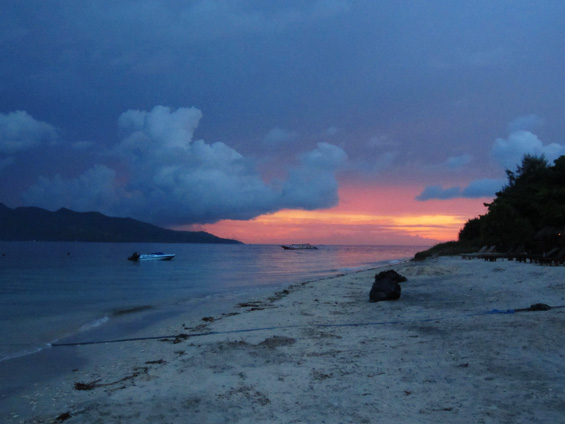 We met up in Gili Air, which is a quiet island off the coast of Lombok which has no motorized vehicles whatsoever! We signed up for our scuba diving with Karang Divers, owned by Alex and Dante, Welsh and English born diving instructors and guides. We paid approx $250US for 4 dives as well as our PADI certification. 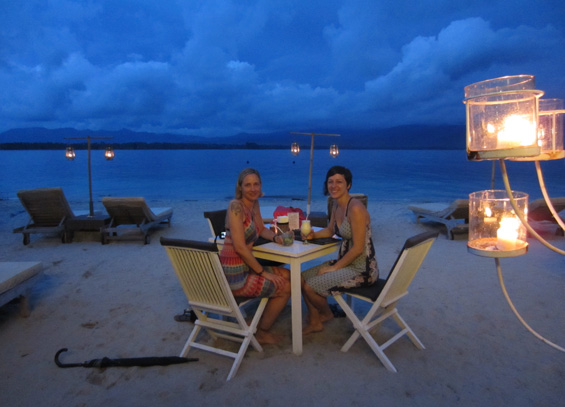 Diving with these 2 absolutely made our stay in Gili Air memorable. They were both extremely funny, and so laid back; I never once felt nervous or panicked! We got private lessons (just the Michelle), and spent 3 days doing dives, including one in Turtle City. The sea turtles were bigger than me! It was far less scary than I thought it would be. In fact, it was so exhilarating, there’s really no time to be scared. Diving is the most incredible feeling; I felt like I was flying, or weightless.

We got a wicked deal on a hotel, as Michelle happened to be sitting beside the owner of Scallywags Mango Retreat who offered her a deal when he heard that she needed a place to stay. This is one of the nicest hotels I’ve ever stayed at, which was ironic considering we were thinking that we would really be “roughing it” on this little island. The bathroom was partially outdoor, with a rainhead shower. 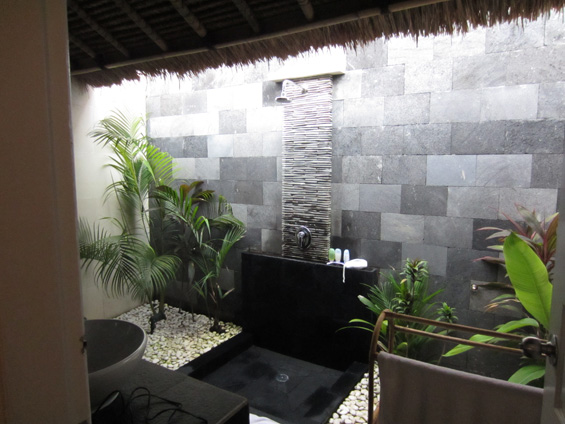 If you took a shower at night and looked up you could see the stars. There was also a beautiful pool with raised deck chairs just outside the room. The 3 of us girls crammed into the room, at a rate of approx. $60/nt for the room. Pricey for Indonesia, but we got a big discount, and it was a nice splurge for a fantastic few nights accommodation.

Poor Rocio came down with a cold and couldn’t join us for diving, but we still all managed to have some chilled out beach time. 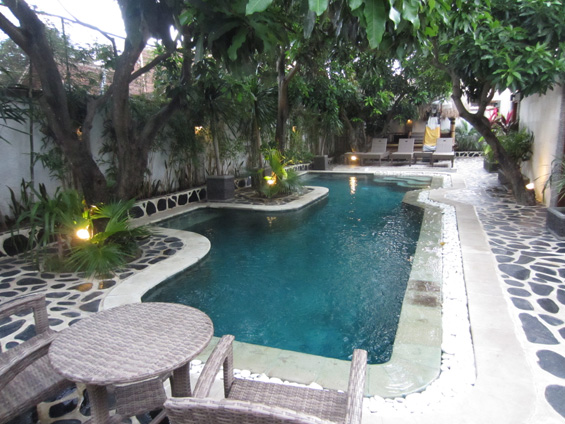 The first night we wandered toward the beach and stumbled upon a bonfire. They noticed us looking and called us over to join. We sat and had a few drinks, and met some new people. One from London, a few from Finland, and some locals from Bali. 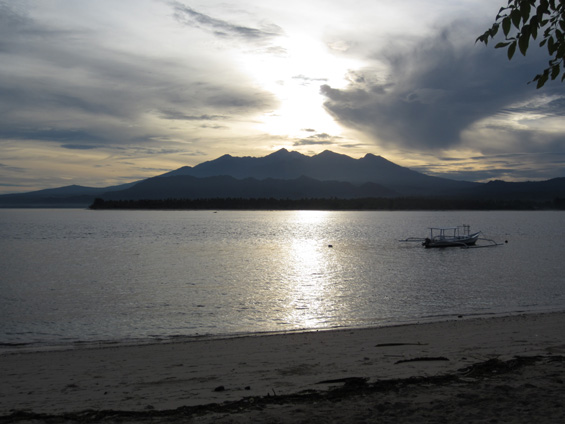 On our last full day, we did our final dives, and filled out the paperwork in order to get our PADI certification cards. It was a fantastic day. That night we went to the island’s Reggae bar where we heard there would be live music. We ordered dinner and had a few drinks to celebrate our new certifications.

I will admit that the next morning was somewhat like the movie “The Hangover”, as we tried to piece together the details of the evening prior… (Don’t worry, we weren’t roofied or anything like that, but it was a “magical” night…)

After trying to understand why my laptop and bag was not where I had left it (it took us a minute to process that we were not in fact at OUR hotel room after all), and why my wallet was missing, Michelle and I began to piece together the fragments of the evening. Luckily the Finnish people we’d met at the bonfire a few nights prior didn’t trust that we would make it safely back to our hotel at the end of the evening, so they brought us back to the bungalow where they were staying.

We determined that before I should have a mini meltdown about my wallet, we should first try to walk back to the bar we were at the night before. I was very skeptical, and it felt like the longest walk of my life. We got to the bar, and found a bartender. Trying not to panic I informed him that I suspected I had somehow lost my wallet the evening prior. He asked me my name, then reached into his pocket and gave me my wallet – WITH ALL OF MY CARDS AND MONEY IN IT. Not a Rupiah was missing! 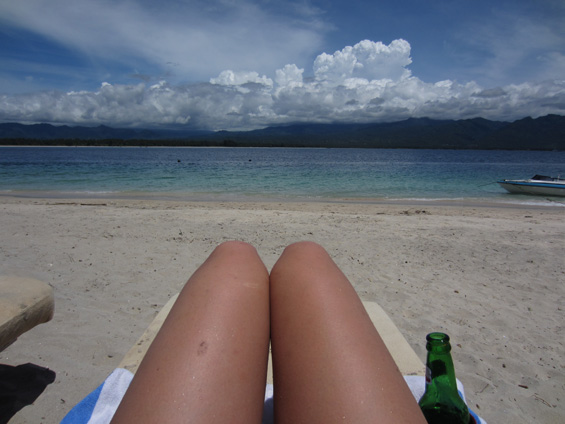 I breathed the sweetest sigh of relief! That could have been potentially disastrous… I did have a backup Visa card, but getting stuck on a remote island without your identification and bank cards is more than a little unnerving. I was shocked and grateful to have everything in tact. The Indonesians have proven to be truly kind hearted people throughout my time here. They have genuine smiles, and have a wonderful care-free way about them. 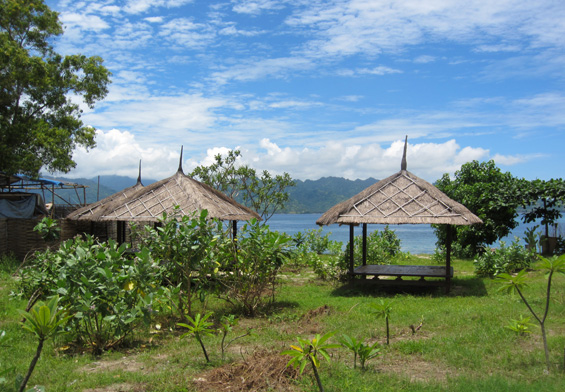 I feel like I kicked fears ass in Gili Air.

We dove, we relaxed, we made new friends, and we recovered from a magical night at a Reggae bar. My time on Gili comes to a close, and it’s time to head back to Ubud and settle back into work life 🙂