I’ve just returned from a whirlwind week in Portland for the World Domination Summit 2014. This was my second year (I wrote about last year here) attending the conference, and I was really grateful to get a chance to meet a lot of people in person who I’ve only known in an online capacity.

If you’ve never heard of The World Domination Summit (when you’re at the border, just tell the border guards that you’re going to a conference for “entrepreneurs”– it’s easier…) it was founded and led by Chris Guillebeau in the spirit of this question: How do we live a remarkable life in a conventional world? It was founded on the principles of Community, Service and Adventure. Never will you find such an energetic, open, and inspirational group of people in one place. If you’ve never been, I highly recommend it. It’s an absurd amount of value for a conference ($500), and it’s in the fabulous city of Portland. The connections I made last year do not even compare to the ticket cost…

Anyway, the roadtrip began from Vancouver, BC, with friends Amanda Farough and Margaret Reffell. With a number of stops along the way, it was pretty amazing to be able to spend a full day in a car with these ladies without going crazy 😉 We discussed everything from relationships to clients, to feminism and beyond. The best question of the trip: “How old were you when you realized that sexism was a ‘thing’?” 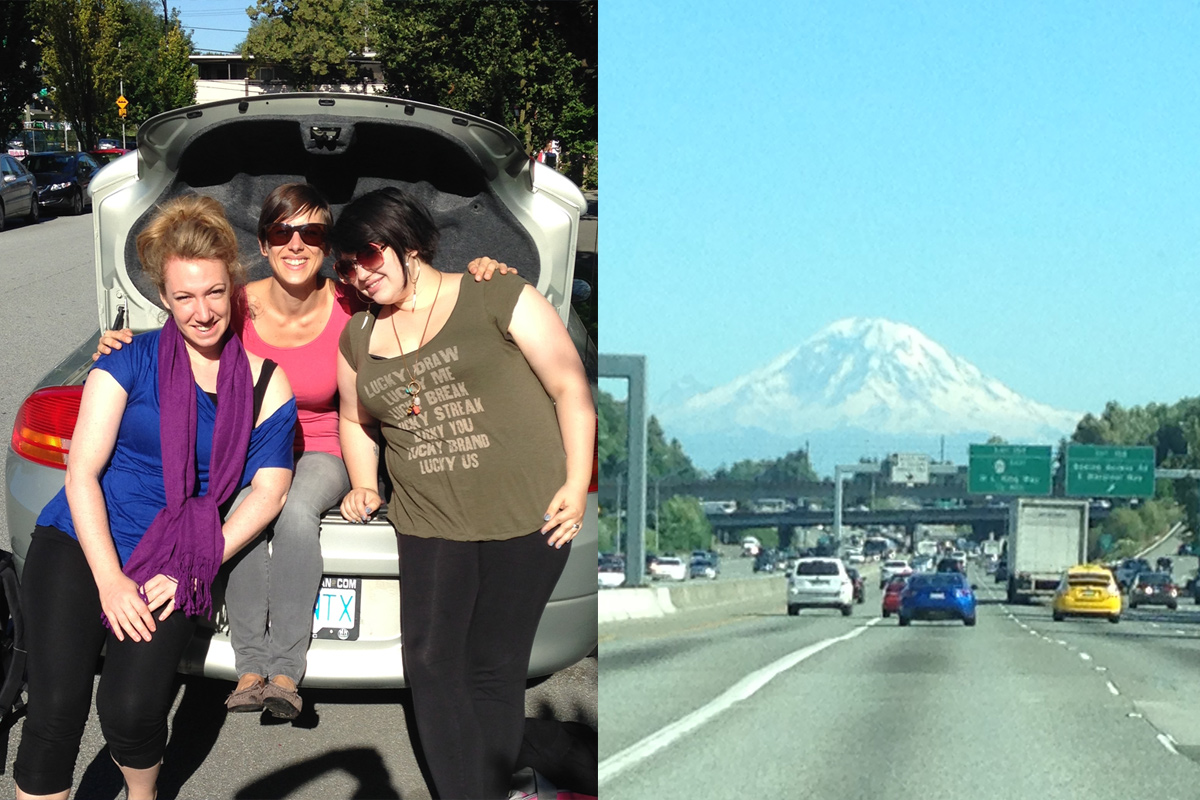 I had no idea when I took this photo of the Tiny House Hotel that there would be a speaker session by Dee Williams who spoke about her own process of creating a Tiny House! Every time I visit Portland, I fall in love and want to live here. It’s like the grungier, weirder, cheaper version of Vancouver! 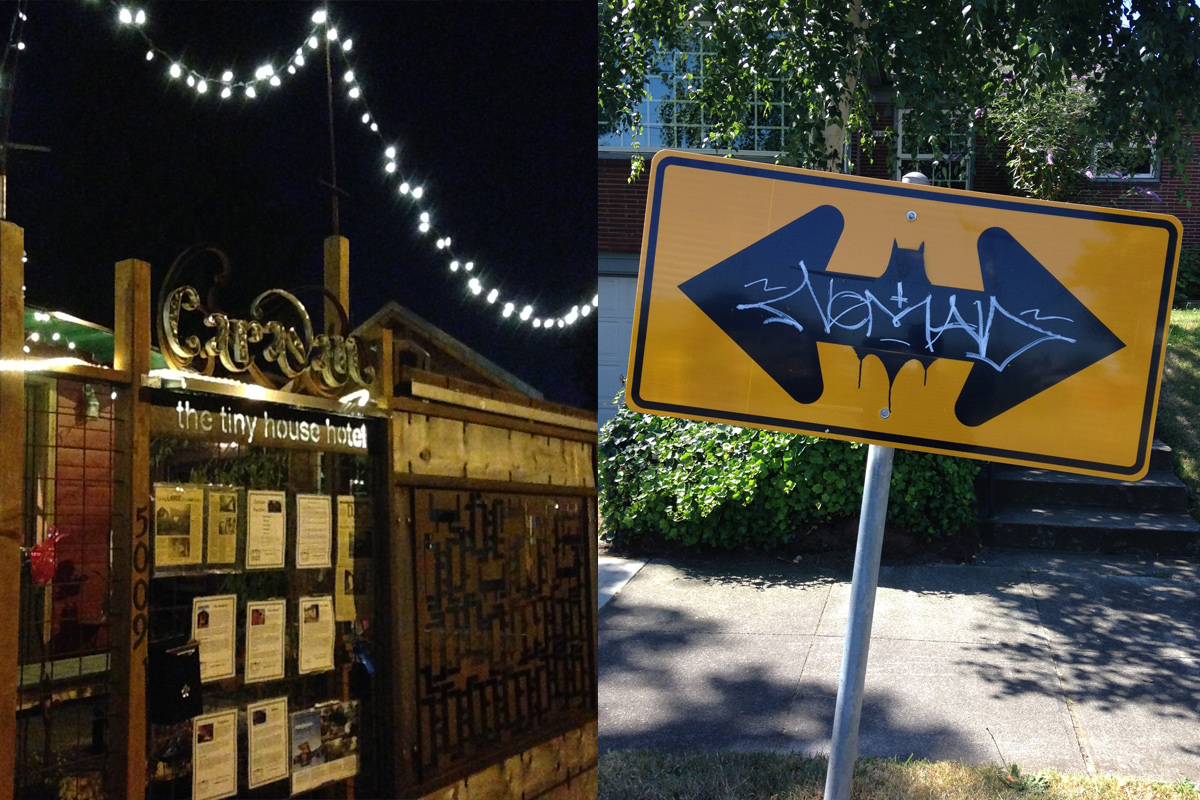 Of course I had to try the infamous Salt & Straw ice cream (which was incredible of course). Next door was an adorable art shop that sold these “horrible adorables” from an artist in Cleveland Ohio, so I actually ended up bringing home a few miniatures for my wall! 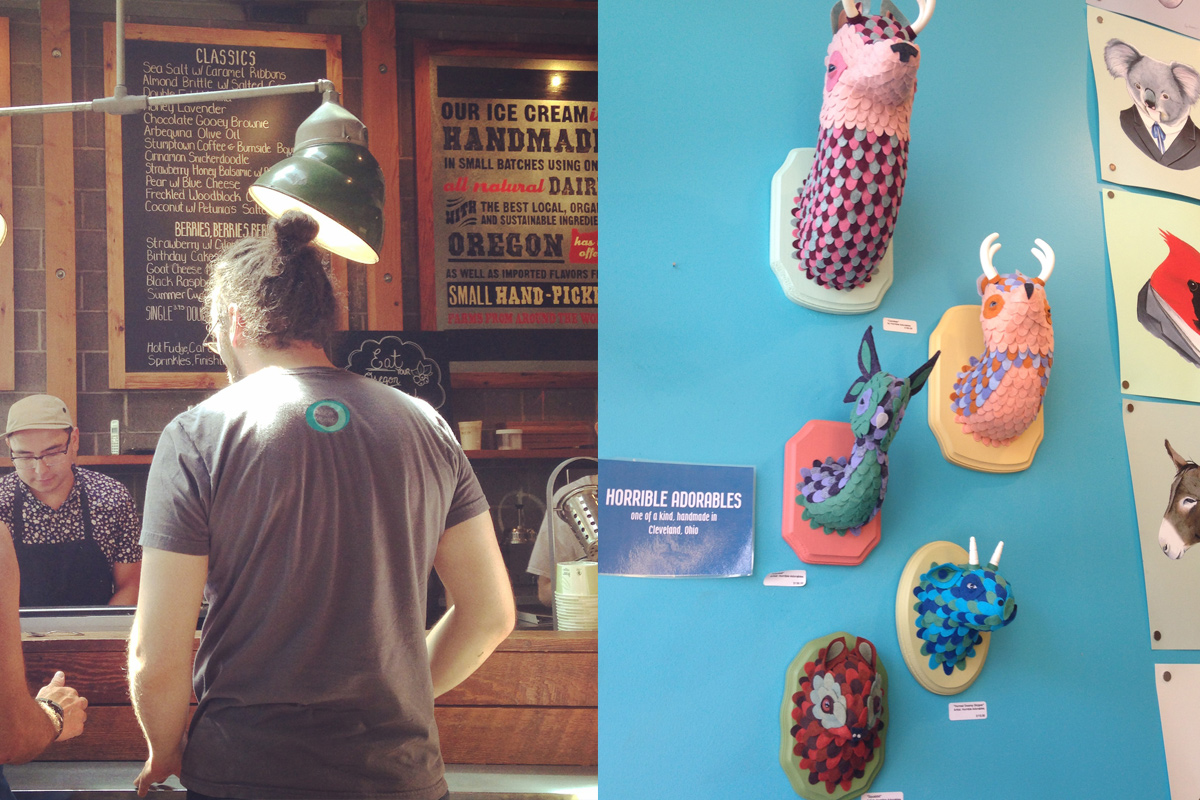 Us in the backyard of our lovely Airbnb near Northwest Alberta street. 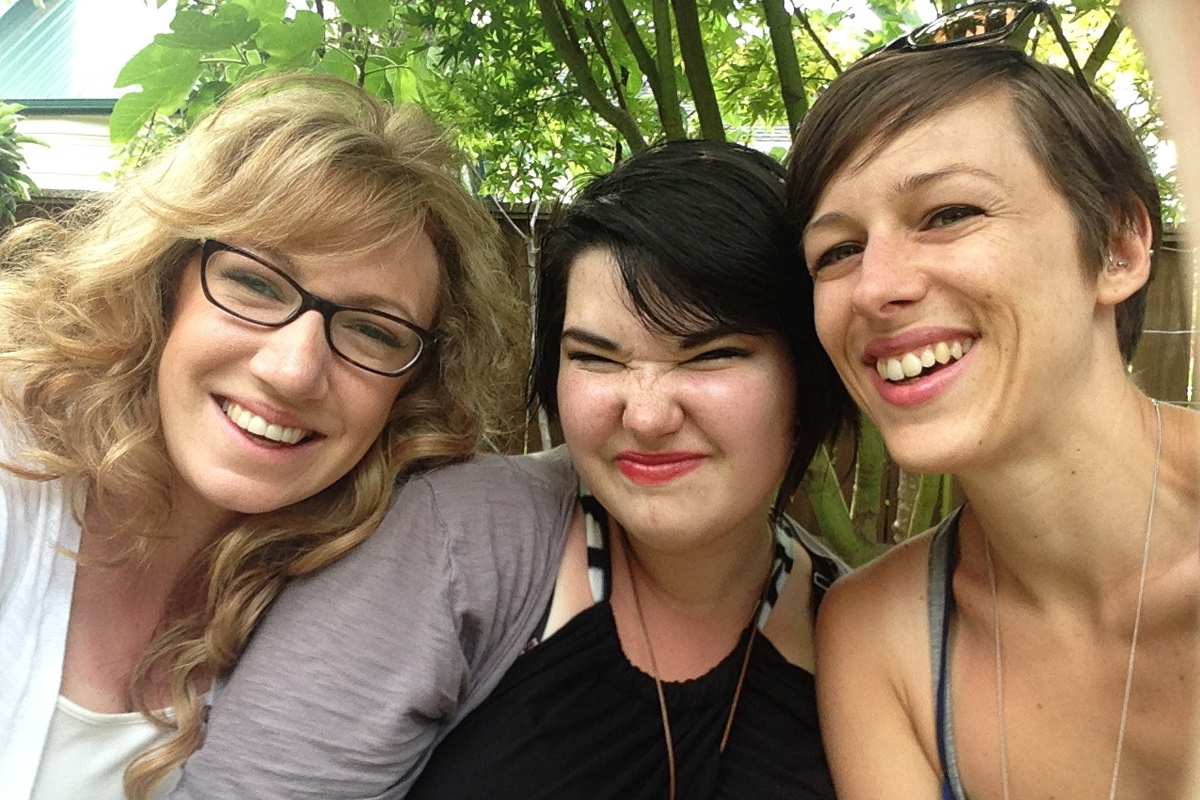 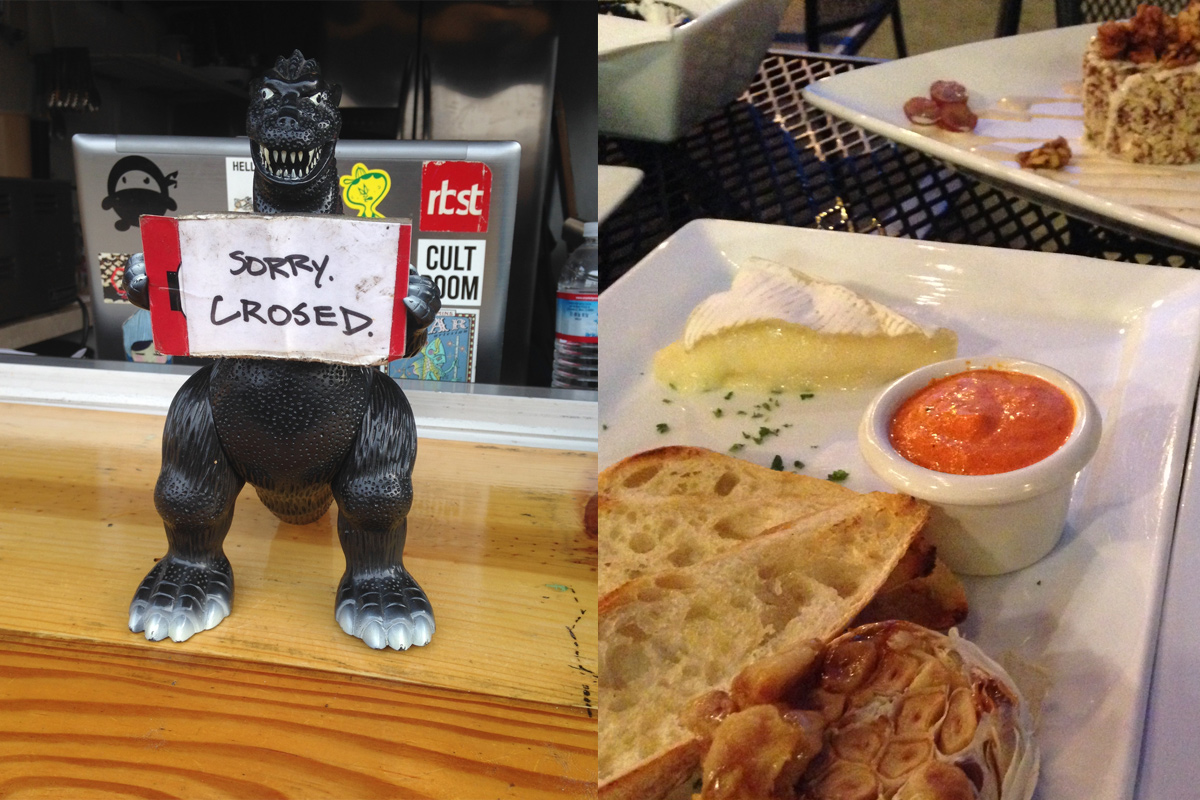 Now I don’t have photos of every speaker, but I’m giving a basic summary and my take-aways from each talk.

AJ spoke about some interesting personal experiments he did over the years (he calls himself a human guinea pig), including living one year biblically, where he attempted to follow all of the rules of the bible literally. AJ’s latest project is a organizing the world’s largest family reunion (http://globalfamilyreunion.com/). After a cousin 12x removed contacted him via email, he began to research ancestry, DNA, and human history, discovering that we are ALL a lot more connected than we think (55th cousins or less apparently!). With tools like Geni, it’s easier to see and understand those connections, which is bad news for biggots!

Jadah spoke about her experiences of sinking into debt and desperation as a struggling business owner. She started and closed several businesses before she succeeded with Simple Green Smoothies, and spoke about encountering every lesson in life on purpose. She dreamed big, maybe bigger than was practical, but within 18 months of starting her latest business, she made her first $30,000 month.

She closed with five rules:

Shannon Galpin is the National Geographic Adventurer of Year and founder of Mountain2Mountain activist. Her talk actually moved me the most, and I had trouble keeping composed. She spoke about how “…gender violence is not a women’s issue. It’s a human rights issue.” We think that violence against women is something that happens in other countries, but it is happening in our own backyards as well (in Canada and the US). She found her “voice” after visiting women’s prisons in Afghanistan, and listened to the stories of women who were in prison, the majority of which were there because they had been raped, or tried to escape arranged marriages. She began exploring how art could be a way to compel citizens into action. Her latest project is Combat Apathy, to give voice to women around the world through activism, art, and global engagement.

The most important thing I took away was how much power we have with our own voice. 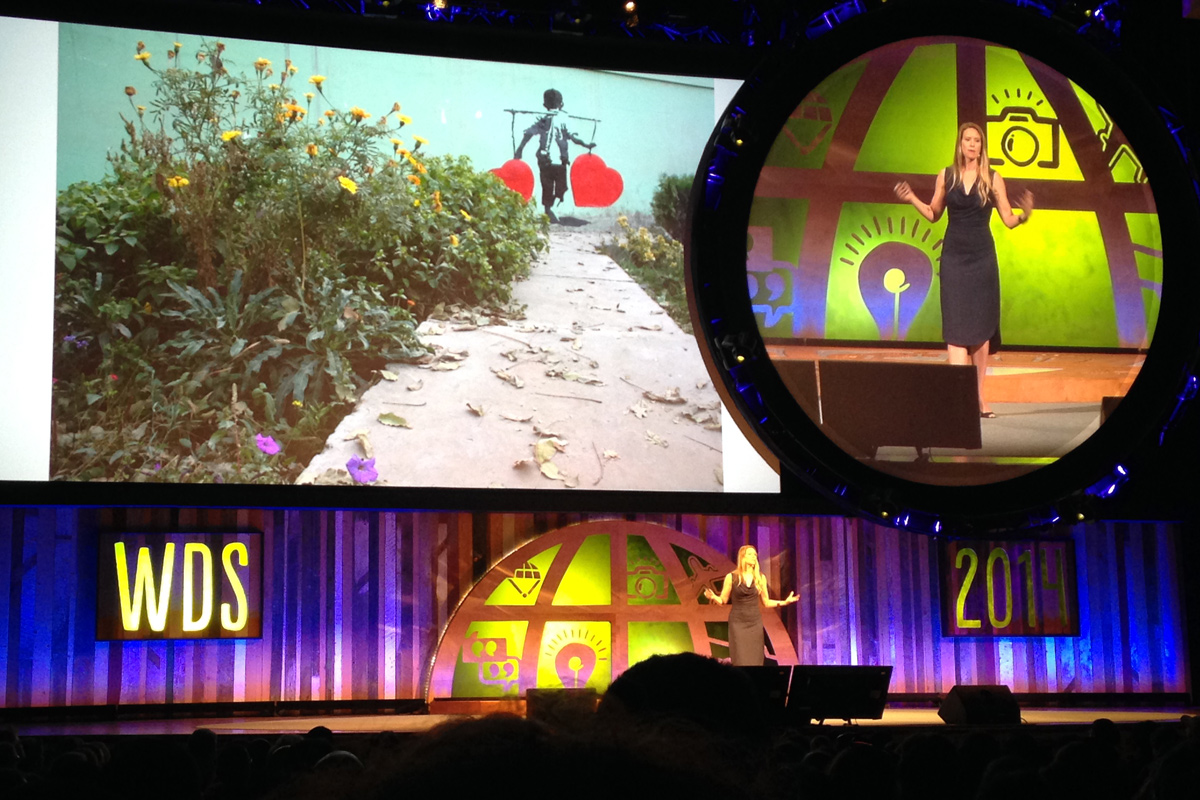 Michael spoke about his personal experiences with his father who had a drinking problem, and had a life that he called “the drifting life,” one where you are swept into life’s choices. He swore never to “be like that,” which led him to an over-compensating “driven” life. The other side of that is what he calls the “designed life”– living with intentionality, but also not being attached to the outcome. Questions to ask yourself: 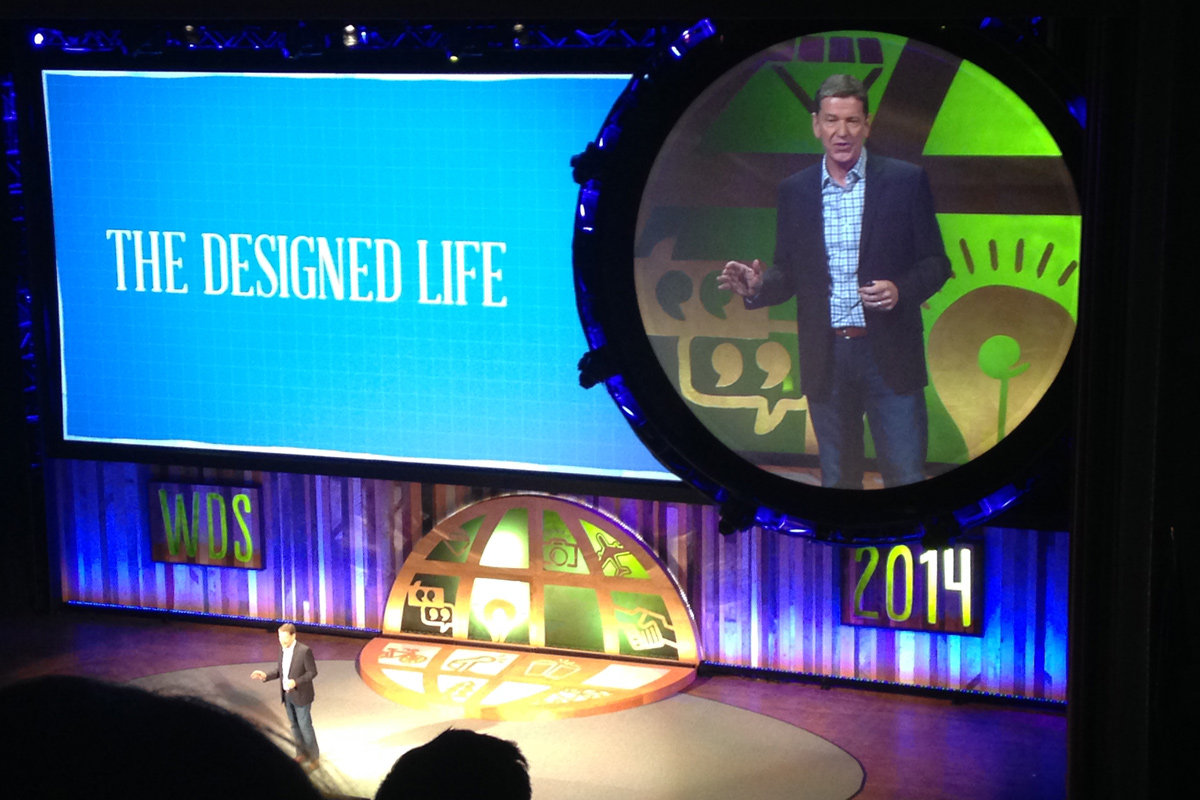 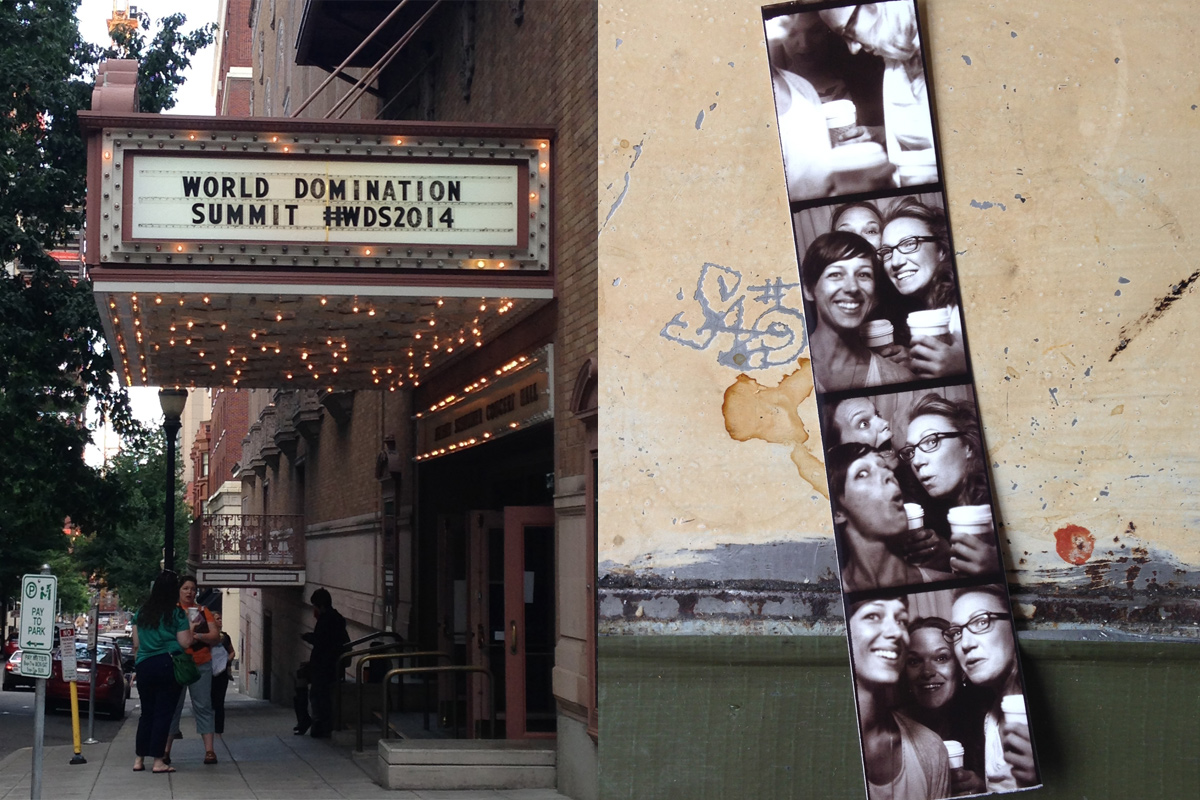 I have to figure out what my brave thing is… (perhaps launching my first online program?) 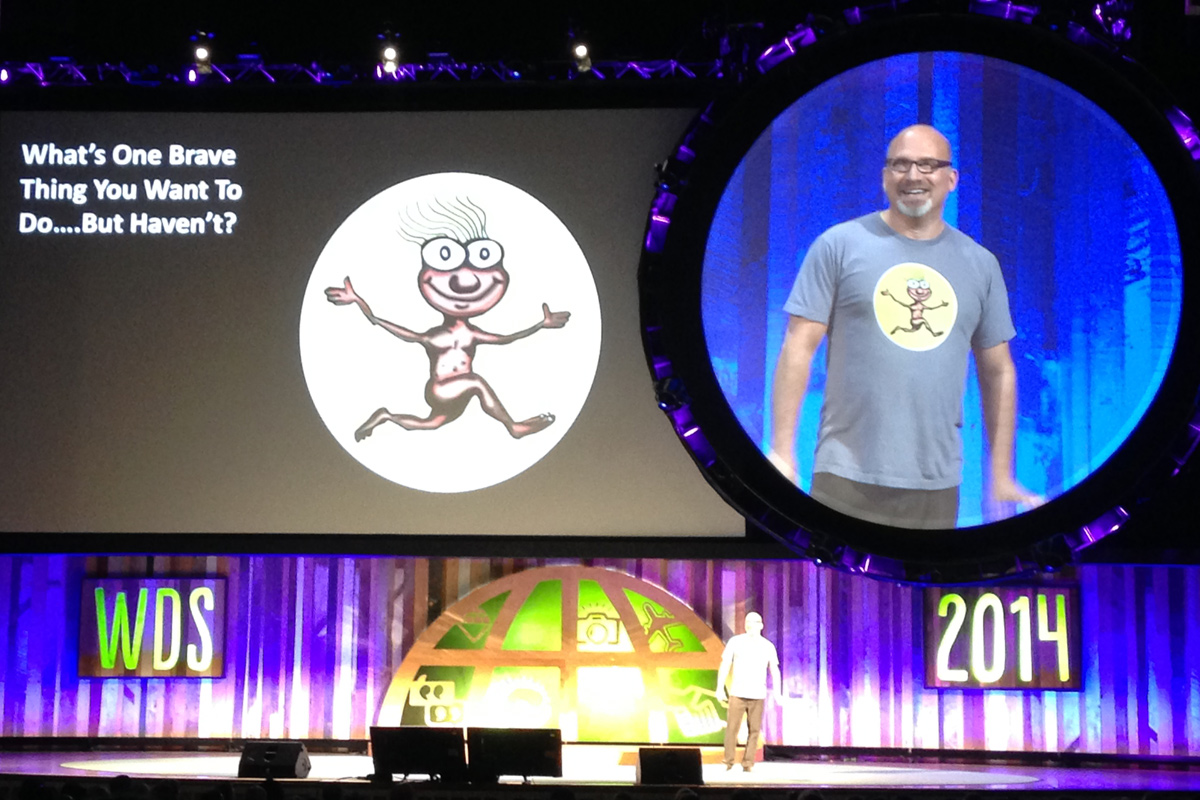 I loved Dee Williams who popularized Tiny Houses. She came out in a red superhero cape (a stolen blanket from Delta airlines), and spoke about her journey and the process of creating her tiny house. She was funny, and down to earth, and vulnerable. She had a heart attack at 40 years old, and she began to reevaluate her life, goals and priorities. The biggest thing she learned about living in her Tiny House, was learning about who she really was as a person. I loved her funny graph below of the things that she thinks about in a given day. Living in her Tiny House allowed her to reconnect with nature, which has always been hugely important. My favourite take-away was her shift in perspective on success, in that she now measures success by how she shows up in the world with her friends. I believe I could translate this personally into how am I showing up for the people in my life? Friends, Clients, Strangers, Lover… I think it’s a pretty sweet metric!

Scott is one of the few speakers who I had heard of before – I’d read his book Confessions of a Public Speaker and quite enjoyed it, and I have followed his blog over the years. Scott spoke about finding your creative soul, and about the space between the big perfect idea in your head, and the struggle of actually sitting down to do the work. He touched on how we feel bad and beat ourselves up because we think it’s supposed to be easy, and we wonder why we struggle. One key piece of advice that he recommended was to always keep a daily journal of your thoughts and ideas (without censorship). He suggested that you might notice certain thoughts and patterns that emerge, and this will feed your creative soul. 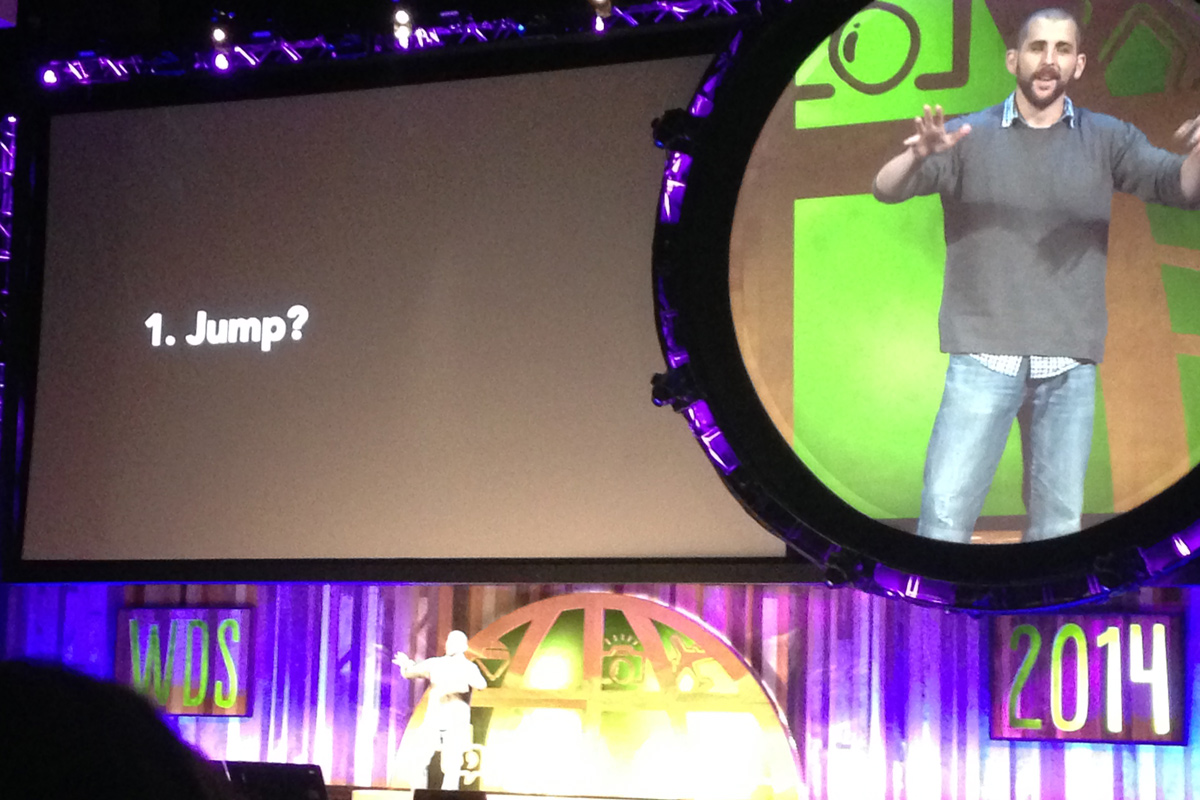 I was SO grateful to get to meet Brigitte Theriault and her partner Carl in person! I met Brigitte through Facebook late last year, and we clicked instantly. We were able to talk about running our own businesses, long distance relationships with our partners, the cities we’ve lived in, and the energy of money. She became a long-distance Facebook friend and accountability buddy (highly recommended, folks!!) that I speak to almost every day, and finally I got to meet her (and Carl) in person, which was so fantastic! Apparently we’re all moving to Portland… soon… 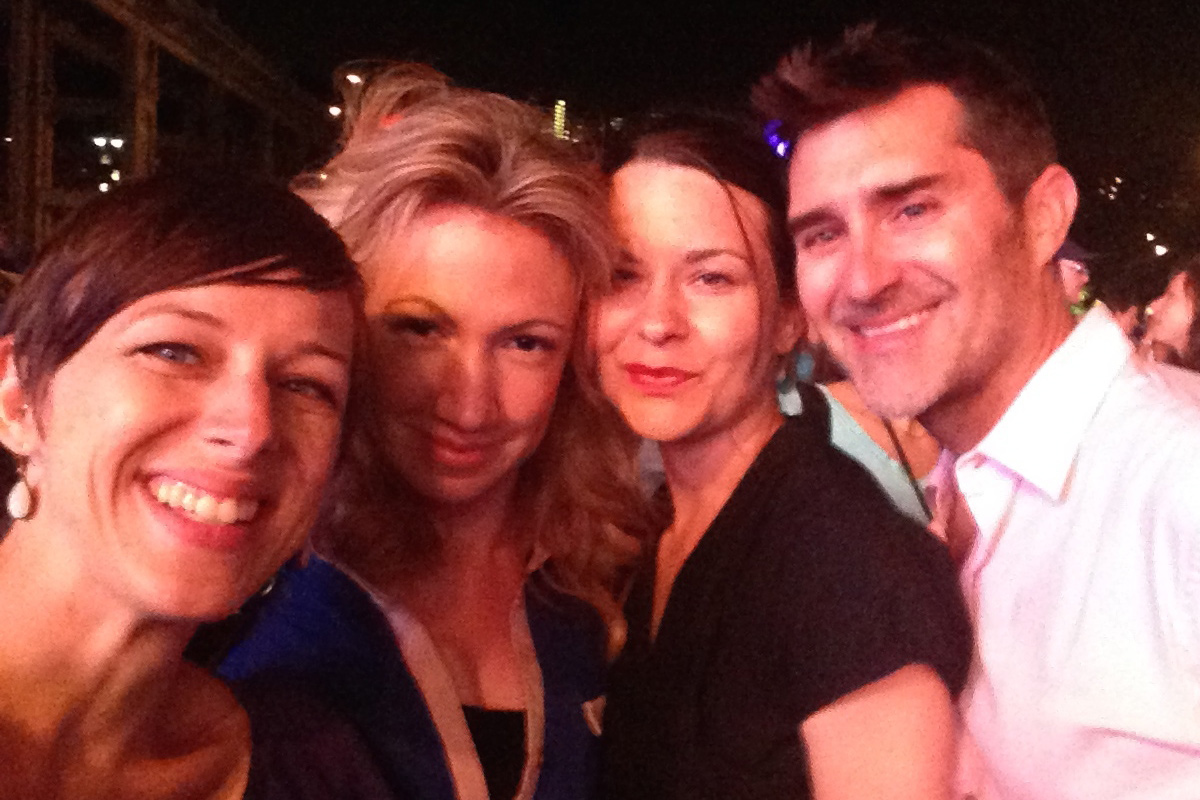 I got to round out my trip by getting a chance to meet some of the most incredible people I’ve ever had the pleasure of working with. Benjamin and Lorie are from Maine, and we’ve been collaborating on their brand and website over the last year. There were in Seattle running their mentorship program, and we would be passing through coincidentally on the same day that we would be driving through on our way back to Vancouver. I figured there had to be a way to make this meeting happen! Luckily Amanda was willing to make the detour (I owe her and her hubby an evening out sans kids!), so we were able to meet at Poppy, one of my favourite Seattle restaurants (I’m pretty familiar with Seattle because my partner and I did long distance from Seattle to Vancouver for a year and a half, until he got Permanent Residency this year).

A lot of my clients I never get the pleasure of meeting face to face, so I was so excited to make this work. My collaboration with both Benjamin and Lorie has been such a wonderful, exciting process, and I have never felt so “in my element” on a project. They’ve been so much fun to work with – I’m very grateful that they decided to step into my life. I get to work with some amazing humans 🙂 Stay tuned for their launch at the end of this month! 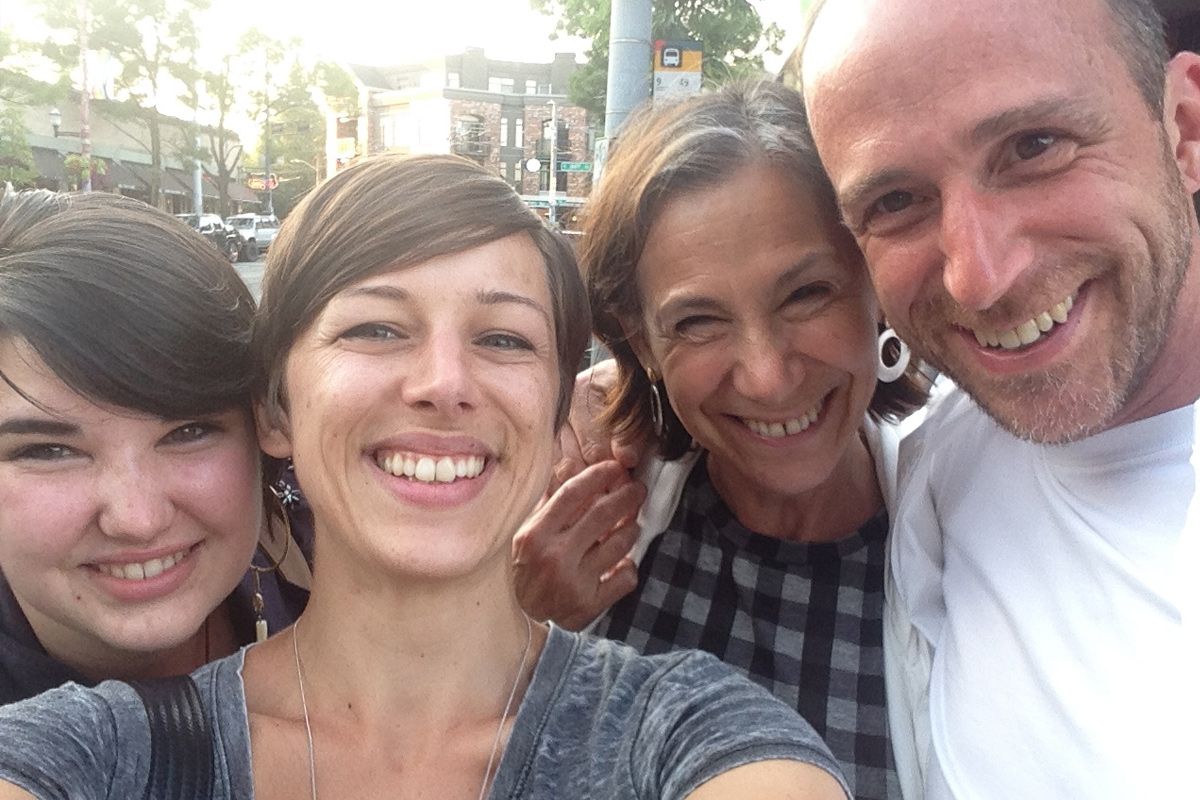 Margaret and I before heading out to the WDS wrap up party.

Obviously I can’t list every single name of those that inspired me during this trip, but I just wanted to give a shout out to my Growers (FB Mastermind group): Illana Burk, Lis Dingjan, Ellen Ercolini, Rebecca Tracey, and not shown: Maggie Patterson, Nikki Groom, Jessica Kupferman. It was also a joy to finally catch up with Ali Shapiro again, who I met at WDS last year. All the lovely designers from my various Facebook groups and online courses, it was so great to see you guys in person too!

It all comes down to people. I was so shy (and overwhelmed) last year, and hadn’t fully come out of my shell yet, so thank you to everyone who has been a friend, colleague or mentor over the years, whether online or in person. You’ve all been part of a big journey of personal growth, and for that I thank you immensely!

You are all amazing, and hopefully see you all again next year! 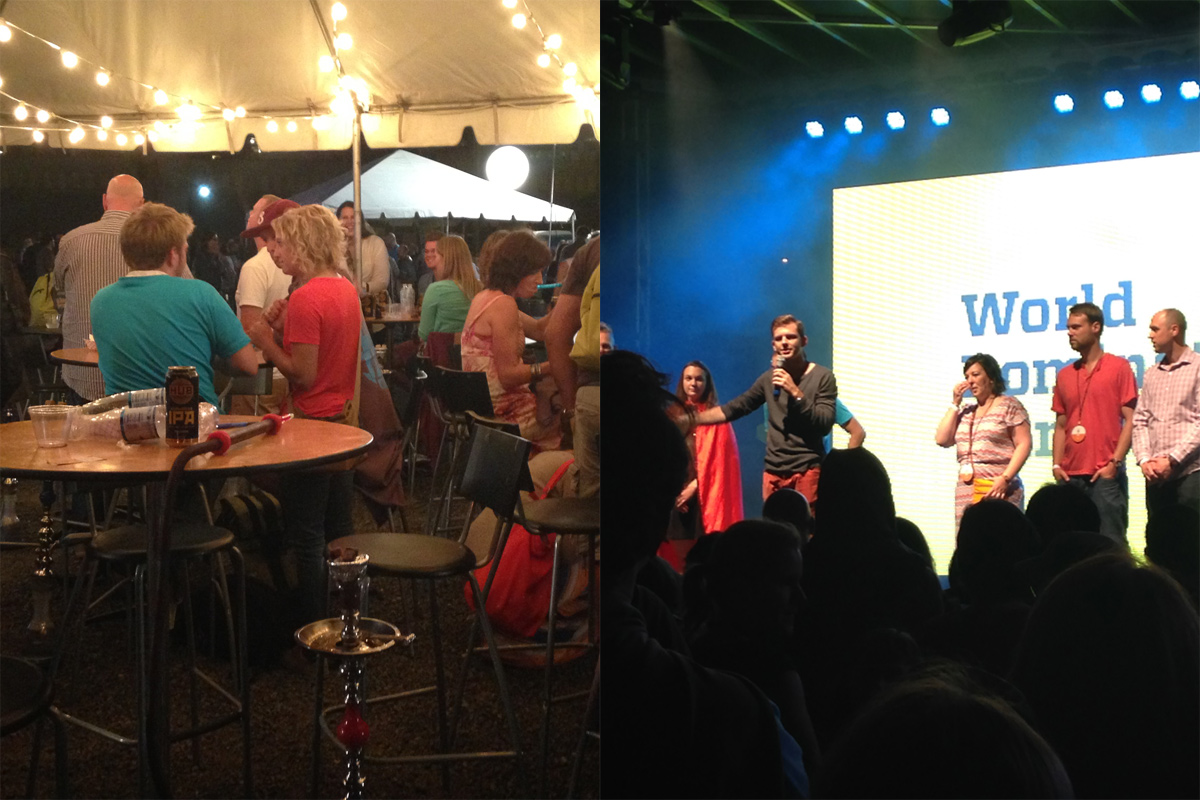