On Saturday September 29, I completed the Tough Mudder event in Seattle. If you haven’t heard of Tough Mudder, it is described as follows on the website: “Tough Mudder events are hardcore 10-12 mile obstacle courses designed by British Special Forces to test your all around strength, stamina, mental grit, and camaraderie.”

Many people have asked why the heck would I sign up for something like that, and believe me, I asked myself the same question many times. I’d heard about Tough Mudder, and knew some people who had done it. I received a text from a good friend of mine (Jodi) while I was in Seattle, asking me if I would like to join her for the Tough Mudder in Seattle. I asked my beau jokingly if he would be interested, and he said “yeah, sure!” So we agreed to join. This wasn’t Jodi’s first Tough Mudder, and I figured, if Jodie can do it, we (probably) could too! Right? 😀

Those of you that know me well likely know that I’ve been on a fear-kicking journey over the last year or so (maybe longer?). I like doing things that scare me (to an extent); it makes me feel alive, and makes me feel as though I’m making the most of my short time on this planet.

I asked a few other friends if they’d like to join us, to which they responded with “you’re going to get hurt! do you know they electrocute you?? you’re insane!” Oh boy. I starting reading a bit about the obstacles and began to get nervous. I decided that I was not going to read anymore about it. I had signed up, and I was going to do it, whatever that looked like. Yes, I was mildly terrified, but I took great comfort in the fact that Jodi— and other ladies that I knew— had done it before, and they had all said it was oh-so-fun.

Here is my review of Tough Mudder Seattle.

It WAS tough, and I had a total blast doing it.

Right off the bat they tell you, this is NOT a race, it’s a challenge. Everyone is in it together, so the expectation is that you help your fellow “mudders,” even if they aren’t on your “team.” 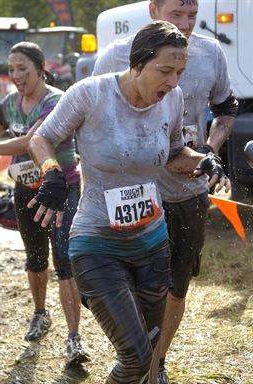 The toughest challenge was one of the first: an ice bath that required you to go UNDER the icy water, under a piece of wood, and come out the other side. I hate cold breezes, and I hate diving into ice water even more. This was an absolutely brutal challenge for me. My body was in shock and I felt myself begin to hyperventilate involuntarily! I jumped out as quickly as I could and tried to catch my breath while also waiting for the rest of my team. The plus side of doing this challenge very early on, is that you just want to get warm again, so you just want to start running! (Did I mention it’s 12 miles?)

Other obstacles included crawling through muddy rocky terrain on your stomach with barbed wire above you. Oh and one of these involved crawling through dangling live wires delivering 10,000 volts. Somehow, I was the only one on my team to avoid electrocution.

Pro tip: while everyone was going through as fast as they could to avoid the electrocution, I slowly slid my way through, making an effort to go under the shortest possible wires, and it worked! No electrocution! 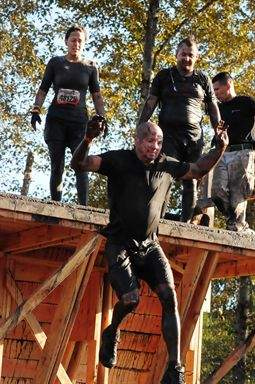 Another one of the tougher challenges for me involved climbing up a flat wall without much to grab onto, and jumping 15 ft from the top into a pool of muddy COLD water. I have a hard enough time getting into lukewarm water, let alone very COLD, MUDDY water that is 15 ft below me. It took me a few minutes to get up the guts to make the jump. I was beyond impressed when I saw one of our fellow teammates who is afraid of water climbing up the wall! You can skip any of the challenges that you don’t feel comfortable with, and I had assumed that she would skip this one. When I saw her climbing up, I knew that I had to do the jump, regardless of how scary it was! I could see my team on the other side waiting for me. The jump was terrifying because you never hit the “bottom,” and it felt like it took me forever to reach the surface! 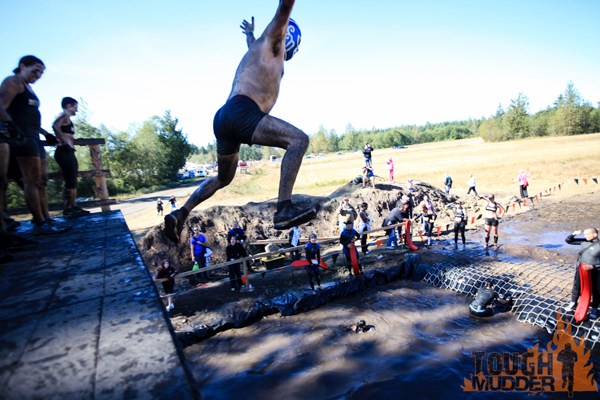 This was one of the scariest challenges for me personally! This was also Ben’s favourite, ha!

A few other challenges: 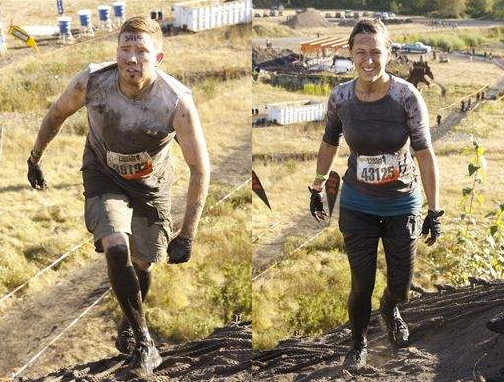 The final challenge was to run through electrified wires. I was prepared to skip this one after hearing about how painful the first electrocution round was. 2 of our teammates skipped this round, and the rest had run through and were waiting on the other side. There were employees and spectators all cheering, and I was hesitating… looking at the simple path on the side that I could use to “skip” the final challenge.

The guy working this challenge worked his magic: “Come on, you’ve made it THIS far! You’ve done all the other challenges, this is the LAST ONE! You can’t skip the last one!”

I deliberated for a good few minutes before another Tough Mudder who introduced himself as Mike showed up. He said, “Come on, I’m scared too! We’ll go together! On 3!” Wimp out or run for it? In case you can’t tell… I hate being perceived (by myself or others) as wimpy. I took a deep breath and we counted to 3 and ran like the wind.

MIRACULOUSLY, I somehow once again did not get electrocuted. (Mike did, a few times!) PHEW. Done. I am officially a Tough Mudder!

You reach the end and there is a Tough Mudder headband, cold beer, and a thermal blanket waiting for you. Cold, and exhausted, I felt a huge rush of adrenaline, not to mention accomplishment. Admittedly, had I properly read about each of the challenges before signing up, I don’t think I would have signed up— but I am SO glad that I did. 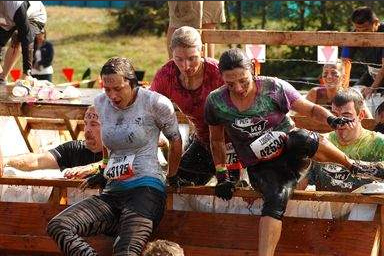 I still have flashbacks about some of the challenges and think to myself, I can’t believe I did that.

You finish with the feeling: “If I can do this, I can do anything.”

And that’s the feeling that I crave everyday: that I can do anything.
*That’s why I did it*, and that’s why I’d highly recommend it to anyone.
It’s tough, but it’s totally doable 🙂