Some of you may know (from Facebook, Twitter, or Pinterest) that I’ve been working on an online course, Digital Strategy School. It’s a design business accelerator for freelancers who’ve had a few years of experience working for themselves, but are ready to run their businesses more strategically.

This has been one of the most personally rewarding projects I’ve ever taken on, and wanted to share some of the things I’ve been learning along the way.

I was terrified to “put it out there.” I’ve been thinking about it in some form or another for over a year, over-thinking the format, the cost, the content, etc. Initially I thought it was a book. Then perhaps it was an ecourse.

I thought my audience was other website owners, and was trying so hard to do what I thought I should do (create an offering for those that couldn’t afford my full partnership services), and in the end, my audience wasn’t who I initially thought it would be.

I decided to take Breanne’s Transform Your Course to help me piece together all the different parts, and it was instrumental in me discovering my real audience, and figuring out a way to deliver content that would help take them from Point A to Point B, which a clear plan of action.

This also led to me releasing my unfinished/imperfect course to a small group of paying Beta testers.

I had no idea there would be such a demand for what I was assembling, and it wasn’t until I had someone offer me money for my insights via Facebook that I realized: I need to do something NOW. Not 6 months from now when this is polished. (If I’d waited until it was perfectly polished I know I would never have started!) So with that encouraging push, I assembled a simple page to gauge interest. I outlined a vision for the program, and included an opt-in. Very quickly I realized that there were a lot of people eager to learn what I was willing to share.

In July I launched what is now the Beta version of Digital Strategy School with 15 students, and I’m learning SO MUCH from working with them! I am able to hear directly from them about their struggles, which allows me to tailor the content to them, ensuring that I’m addressing real issues, and not the issues I imagine they have. The direct feedback is so valuable, and running a paid beta means that you don’t have to go broke while devoting time to the content creation.

I was stressing out about the format before I even knew what the content was. I should know better as a designer that form follows function. I had to let go of my pre-conceptions of what the format of this thing needed to be, and focus on helping the people I needed to help. In the end, a huge piece of that was conversations via Facebook. This led me to use a Facebook group as part of my Beta, which has been an excellent starting point for creating tremendous value for my participants, as well as learning from their questions, etc.

Sometimes when we give ourselves permission to let things evolve, things flow much more naturally. Once I let go of specific outcomes, format, audience, etc, the path revealed itself, and everything fell into place more more easily. Sometimes you just need to trust the process, and stop overthinking.

You cannot and should not do it alone. There’s no way I could have launched this Beta without support:

Erika’s coaching in February was a huge part of moving past some of my mindset blocks that were keeping me from making progress.

Cristina Donadio has been a mentor of mine since I met her at The World Domination Summit last year. As a Tony Robbins coach, mentor and friend, her support has been instrumental in my progress on this project.

Natasha Vorompiova has been coaching me through Tara’s 10k Feet Coaching program. Getting her insights and support, as well as accountability is a huge part of why my Beta launched now, and not 6 months from now.

Breanne’s Transform Your Course gave me the accountability and clarity that I needed to make my course happen in a practical way. As a curriculum designer, Breanne helped me realize that I needed to be focusing on what my students needed to learn, and not what I wanted to teach.

My partner Ben, with whom I founded Oki Doki, has been my rock throughout this entire process. He is also hard at work building the new teaching platform that Digital Strategy School will eventually live on.

Janessa Rae, who helped me realize that I had something to offer now, and not later 😉

My students! Everyone who has trusted me to guide them along in the journey to Digital Strategist – I am eternally grateful to each and every one of you for helping me find my spark again.

Stay tuned for more behind-the-scenes as I work through the course creation over the coming months. 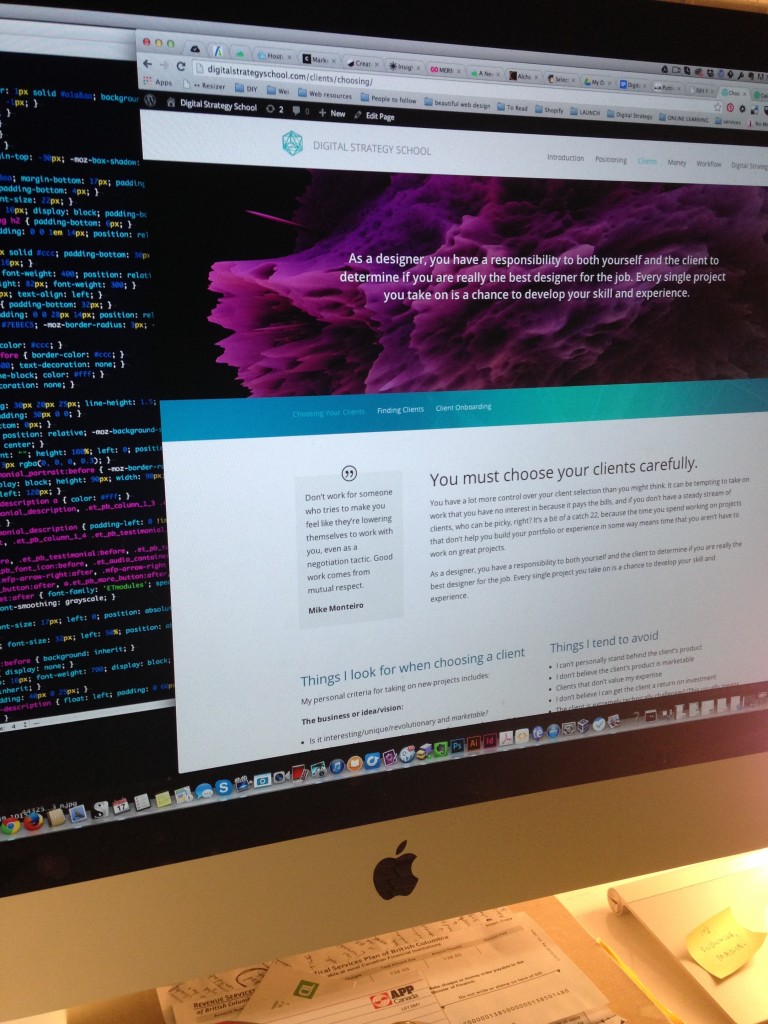