I recently decided to join the East Van Pillow Fight Club. Yes, seriously, it is a real club that exists, and yes, I am actually a pillow fighter.

Why on earth did I join the club? 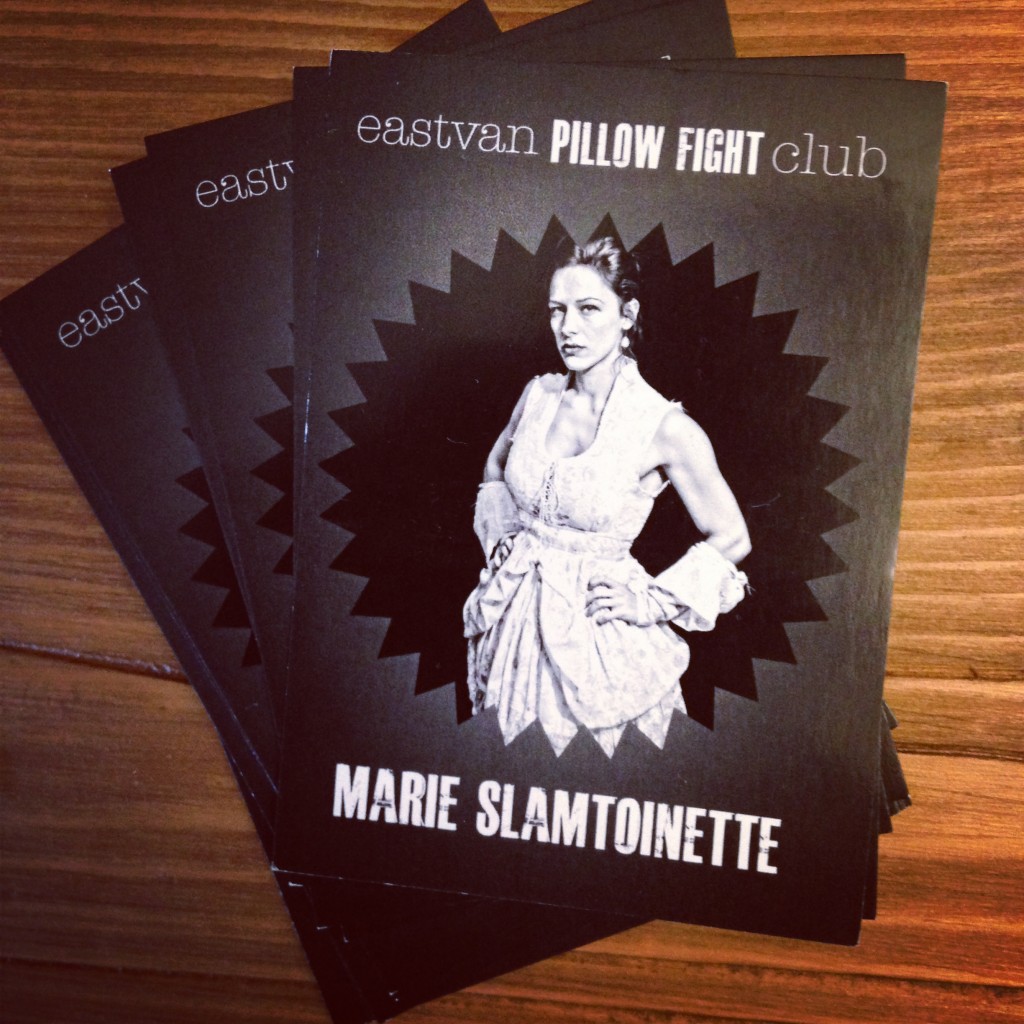 Those of you that know me well know that I generally do not seek attention, and certainly would never consider myself comfortable in front of crowds. This has slowly gotten easier over the years with lots and LOTS of work! I realized that if I wanted to have more impact on the world via my business and life, I would need to be free of the fear of being in front of other people, whether it be speaking, writing, or heck, even performing.

I saw the East Van Pillow Fight Club perform as one of the acts at the comedy/talent show Talent Time, and it was one of the strangest, craziest things I’d ever seen. Not only that, but it looked like a crazy amount of fun! Each of the girls was “in character” and fought 1 on 1, wrestler-style, but with pillows. It also looked absolutely terrifying. It turns out this was just a small version of their full performance that happens at the Astoria every 2 months or so. Turns out the club actually fights to raise money for a women’s rape relief shelter. How awesome!! 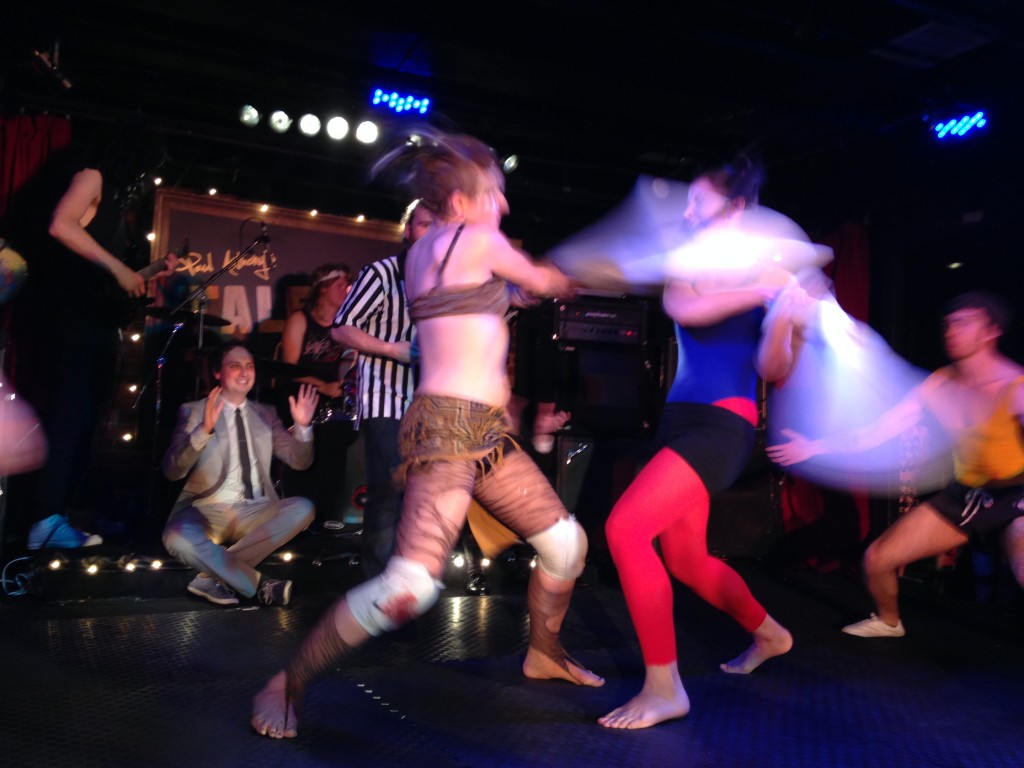 A crazy thought popped into my head. I am athletic, and love getting physical; I already climb 3 days per week, and in the summer I play Gaelic football another 2 days per week. Maaaaybe this could be a crazy way to practice getting more comfortable in front of crowds..? I was simultaneous intrigued and terrified. I knew I had to do it.

A few days after the show, I emailed the club and asked about becoming a fighter. Two days later I attended an audition, which basically involved a short work-out with the girls, going over the rules, and then practicing with them. With my character of Marie Slamtoinette, I made the cut, and started attending the practices. My first fight with the club was scheduled for April 5, 2014.

A lot of the girls in the club seemed very at ease with the idea of performing (this club is not for the faint of heart), and I did my best not to let on that I was secretly sh*tting my pants at the idea. When I found out that we had to select music for a 30-second wrestler-style intro, my jaw dropped. Holy crap, this was more intense that I expected! What have I gotten myself into??

Thank goodness I was so busy with a client launch that I barely had time to think about it!

I made a costume for myself and my partner, and we came up with a little skit/theme for my intro. I forgot how much I loved sewing!! I had such a blast doing the costumes. It’s been so long since I dressed up in a costume, that I was actually starting to have fun with the idea.

Luckily there was a small group of us that showed up for rehearsal, so I was able to get some great feedback on my intro without feeling completely put on the spot. I was starting to feel slightly more prepared for the inevitable “entrance,” as well as my rookie fight. The plan was that I would waltz into the ring with all my accessories (pearls, crown, lace fan), and I would slowly get rid of them behind me in preparation for my “fight” while my peasant boy collected them, putting them into a gold pillowcase. At the end of my 30 seconds, I would shoo him into the corner where he would get down on all fours, and I would sit on his back like a make-shift throne. Mwahaha!

Pillow Fight Day arrives, and I’m more terrified of my intro than I am of the fight!
Luckily my friends are in the front row, ready to support and cheer my name. Ben is behind me, as my support/peasant-boy.

Admittedly, the build up was much scarier than the intro and the fight. I was nervous and excited, and ready to get it over with. The rush of adrenaline from the crowd, and the screaming fans helped melt everything else away, and there was only me and my opponent (my talented friend Ona!)

You can see our first round below:

I ended up winning the fight, and had an incredible night.

But most of all, I made it through my fear of performing. I’m sure I’ll always get nerves when I’m performing in front of others, but this whole experience provided such a safe space for working through my stage fright. 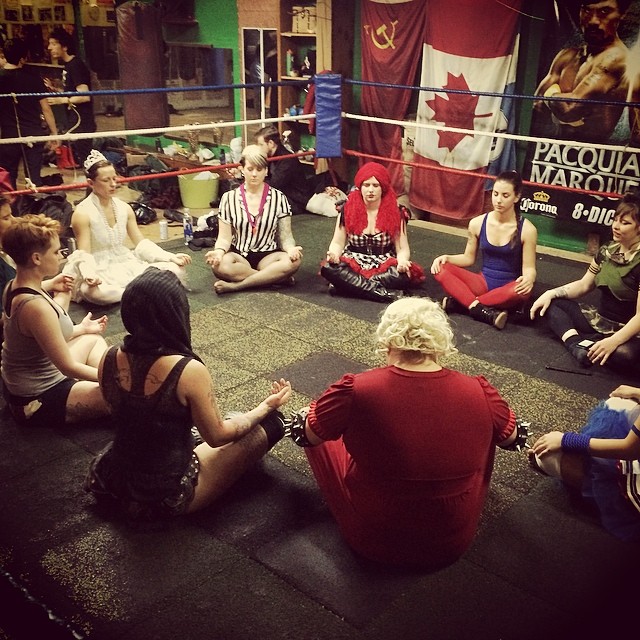 We had 5 minutes of meditation before the fight, led by Mel, the founder and organizer of the EVPFC. Something she said resonated with me: everyone has a different reason for being here. And it’s true. I have no idea why the other girls fight, and some of them may not have realized that I was doing it as a personal challenge. But it made me feel so much more connected to the girls in the club, because whatever our reasons are, we are all there to provide a safe, fun space for each other.

Do one thing every day that scares you.

You never know where it could lead. New friendships, new opportunities, a fresh perspective, a sense of achievement…
I want to thank the club for helping me find a safe space to work through some of my old nagging fears.

You can also check out an awesome fan video of the experience here: